Ah, the thrill of instant gratification! The trouble is, “instant” usually also means “thrown together,” but if you’re OK with that sort of thing once in a while, it just adds to the fun. If you like quick makeovers and hot glue and believe that “C’s get degrees,” then this is the perfect project for you. On the other hand, if you like straight edges, lasting quality, and general perfection… well, I hope you’ll look the other way. This project requires: existing pillows in need of a makeover, scrap fabric 3x as long and just over 1x as wide as your pillow, hot glue, and a hot glue gun. Oh, and 10-15 minutes of semi-uninterrupted work time. 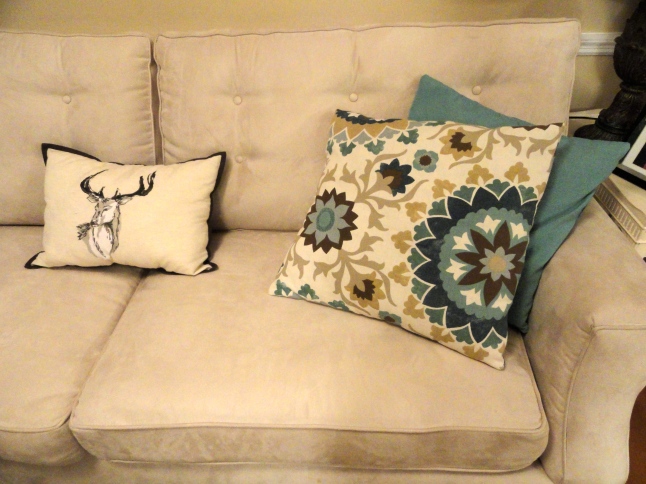 So I think I had buyer’s remorse about these “medallion” pillows pretty much from the moment I left the store with them last year. On top of everything else we needed for the house at the time, pillows seemed like a surprisingly expensive luxury. (Side note – there must be some sort of “pillow makers’ union” that I have not been informed of, and that artificially inflates their prices, because I’ve seen pillows that you would think were comprised of golden fleece stuffed with unicorn hair… but I digress.)

Anyway, when we first moved in last year, the living room looked cold and bare without accent pillows, so I broke down and hurriedly bought a 2-for-1 pack at an outlet store and called it a day. I was over the pattern almost immediately. Not that there’s anything wrong with it, necessarily! I do love the colors… but it’s just overall a little too bold for my taste, which has a more neutral, rustic-glam lean.

Fortunately, I was cleaning my craft room today and came across some scrap fabric left over from a failed but valiant attempt at making my own Roman shades. It was totally one of those “Pinterest fail” incidents that you hear about. I really tried… I mean, I went so far as to hang them up! They just looked incredibly DIY once they were up there, which is sort of a HUGE “no-no” in the land of DIY-dom. One of those, “a magician never reveals his tricks” kind of things. I think I’m officially off-topic. Anyway, I tossed the whole gluey, mini-blind-skeleton mess and kept the scrap fabric, which had been a Target tablecloth in a previous life. Just wait ’til you see the fun pattern!

This was the shape a size of my fabric. No cutting, no nothing. I laid the pillow on top of the scrap fabric strip, and as luck would have it, it was just barely wide enough and plenty long enough to cover the pillow. I played with folding it a few different ways before I found a method that allowed me to cover all the sides. I figured with some hot glue (a.k.a. greatest craft supply EVER), I could finagle it all into place and then tack it in a few spots. It ended up being a lot like wrapping a present… especially if you are trying to wrap a weird-shaped present with too-small wrapping paper and are feeling a little deliriously desperate to make it work. We’ve all been there. (I’m looking at you, Dad! That gift-wrapped jumbo popcorn tin will go down in history as the funniest wrap job, ever.)

OK so here’s the low-down on how I made the easiest pillow cover known to – well… just me I guess. (And I finally took pictures for once, y’all!)

Step 1 – Fold the fabric over one side.

Step 2: Fold other side to an appropriate length and into a slight taper

Step 3: Fold second side over and tack in place with a little dot of glue

Step 4: Play with folding the open edges (like a present!) and tack them with a little glue every few inches 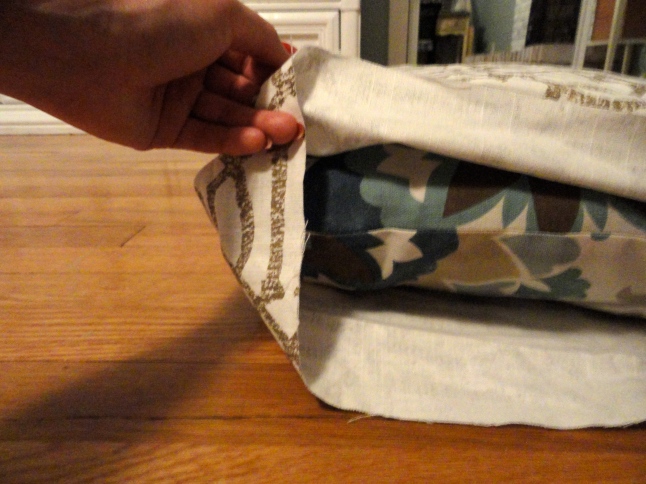 Step 5: Step back and admire your handiwork. The “front side” looks pretty decent!

You can see above that depending on how I folded and glued the corners, some turned out pointy and others turned out more rounded. I ended playing with them some more to get them to look a little more uniform. Plus, once I threw them back on the couch, all inconsistencies were forgiven!

Step 6 (optional): Repeat with other pillow

How about that? Looking nice and neutral!

OK so you can definitely see the folds along the back if you look at the pillows from the side… but for about 10 minutes of effort, I am fine with it. And, since I used such a minimal amount of hot glue, if I ever decide to change these pillows again, I can totally salvage this fabric to use for something else. There’s always a “something else.”

I’ll admit the folding process was a little tricky on the sides where there wasn’t much margin – not a task I would recommend for the easily-discouraged-newbie-crafter-slash-perfectionist. I just did the best I could and figured I wouldn’t see the back and sides much so they didn’t have to be exact. (Also, there is a certain amount of freedom and serenity that comes from knowing you are completing what “should” be a sewing project with naught but scraps and glue.) There’s really no way to permanently mess this up! Just try, adjust, adjust again, and if all else fails, start over. No harm done!

Bonus feature: For those who don’t know me, THIS is my idea of a hot glue gun: fully loaded and complete with a 15-foot extension cord. Because I don’t like to be tied to one corner of the room when I’m slingin’ hot glue!

Extra bonus feature: For another quick and easy update idea, check out this brilliant no-sew ottoman recovering project over at Found This, Painted That: 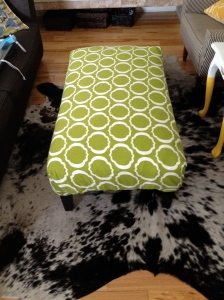 Thanks for reading, and happy scrapping!

Found This Painted That

Decorating Solutions for the Dollar Challenged

reframing the world one picture at a time